From the Mayor’s Parlour 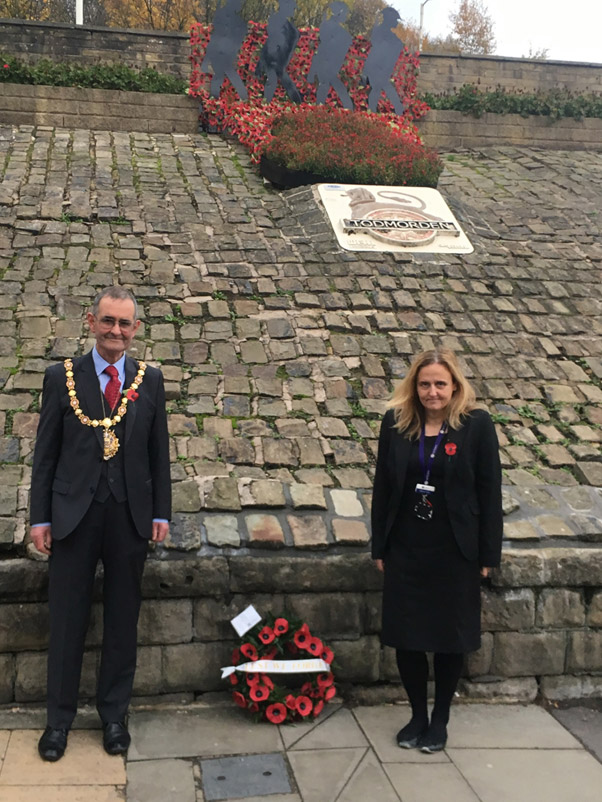 Last weekend was one of reflection, about the fallen and about peace. The weekend started, though, on Friday 9 November, when members of the Todmorden branch of the Lancashire Fusiliers took a train to Manchester and travelled around laying wreaths at numerous cemeteries before returning in the afternoon to Todmorden, cheerful but tired.

The lady in the picture is Rebecca Styles from Northern Rail, who co-organised the whole ‘trip’ with the legionnaires, including tram journeys. Note the non-metaphorical, physical power of the poppy, though: it’s even pushed the mayoral chain out of joint.

By the way, if in October I made it sound as if the British Legion had been entirely responsible for the display at the station I was wrong (fake news). Todmorden in Bloom were the ones behind a joint venture with the fusiliers.

On Saturday 10th November, Todmorden Orchestra continued in a different way with the centenary theme, delivering a remarkable programme including a 1970s trumpet concerto by local composer Tim Benjamin, a piece he interprets as the story of a young man going to the front in World War 1. It certainly contained all the nervousness, tension, chaos and, ultimately, sense of determination that one might have expected. The performance was brilliant.

As was Sunday’s commemoration. Last year nearly everybody’s hats flew off in the wind, even the fusiliers’. This year, apart from a bit of rain, the weather was benign and did nothing to dampen the spirits of the hundreds of Todmordians (our MP was there too) who turned out to celebrate the 100th anniversary of the signing of the armistice. One of the poignant highlights of the service was Shavon Pointon’s performance of Saving Grace, available to all on Tod Chat and That. Thank you to all who organised the parade and service.

In two days time, 17th November, I expect the mood in Todmorden to be very different. The Lamplighters will be here again, and there’ll be well over a thousand people attending what is one of the most popular and exciting events in the Todmorden calendar. The official opening is at 5.30 pm on Rose Street. The parade through town begins at 6.15 pm.

Even more exciting, though, is what will be happening before that! From 3.30-5.30 pm the Mayor’s Charity, Calder Valley Search and Rescue Team, will be serving tea, coffee and cakes (including gingerbreads) downstairs in the courtroom at the Town Hall. Members of the Team will be present, both biped and quadruped.